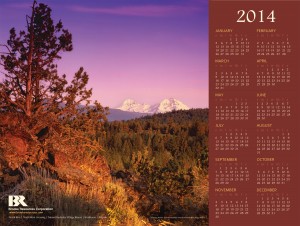 Brooks Resources Corporation’s annual wall calendar has graced the walls of Central Oregon businesses and homes for nearly three decades. Featuring beautiful scenes from our region, this year is no different. For 2014, a mountain view beyond the rich colors and texture of the high desert landscape is featured. Taken from the Brooks Resources’ community of North Rim on Awbrey Butte, the photographer for this year’s image is by Mike Houska of Dogleg Studios.

Thousands of the calendars were distributed last week to local businesses by non-profit group Abilitree (formerly CORIL – Central Oregon Resources for Independent Living) in exchange for a donation from Brooks Resources. Abilitree empowers people with disabilities to grow their independence, productivity and inclusion in community life by providing them with resources and employment.

Individuals are welcome to visit the Brooks Resources corporate office in downtown Bend, Oregon to pick up a calendar for free. Brooks Resources is located at 409 NW Franklin in downtown Bend and will be open to distribute the calendars from 10 a.m. to 3 p.m. on all business days. Mount Bachelor Village Resort and the North Rim Lodge will also have calendars available for pick up.

North Rim, where the calendar image was taken, features acre-and-larger homesites within Bend’s city limits on Awbrey Butte. The community, which formally began 10 years ago, is expected to sell its final lots in 2014. A unique feature of the project is its North Rim Deschutes River Fund at The Oregon Community Foundation (OCF) which was created through the donation of a percentage of all North Rim homesite sales dollars. The fund has garnered over $800,000 since its inception in 2004.