New project in the works for the Bend Central District

A few weeks ago, we interviewed our Director of Planning, Dale Van Valkenburg, about the Bend Central District (BCD) and some of its potential opportunities and challenges as Bend continues to grow. Brooks Resources has a new project in the design phase for the BCD that is pioneering in its vision – meeting some of the city’s new zoning for the area, including more residential uses.

The project, located at 181 NE Franklin in the site currently occupied by Blue Dog RV, was recently covered by the local news in an article that outlined how our plans were in line with the “effort to catalyze redevelopment of Bend Central District… into a more urban space, with denser, taller buildings that include retail and residential uses.”

Here’s what Dale, who has been heavily involved in the planning process, had to say about our future plans in the district!

What does Brooks Resources have planned for the Bend Central District?
We’re really excited about a mixed-use building that we have in the works for the district. To help lead the way in new housing options for our growing community, we have created plans for a new 139-unit, five-story, vertical mixed-use building called 181 Franklin. The plans include a number of key amenities, including a variety of unit types from small studios up to 2-bedroom units, a dog park, brewery, outdoor gathering space, retail and more at the ground level. In addition, our concept includes secure on-site parking for each unit as well as an existing CET transit stop adjacent to the building entrance that will be enhanced through the project.  Public improvements will include on-street parking, widened sidewalks, and the addition of street trees along both Franklin Avenue and 2nd Street frontages of the site.

There have been some challenges leading up to this point. It has been a bit of a chicken and egg scenario, as the city needs to increase property tax revenue from development in the area in order to make progress on the necessary infrastructure to support residential uses. Downtown is a good example of a successful urban renewal district, as several years ago it was a bit depressed and needed revitalization to draw people to the area. The renewal was successful and generated enough money to upgrade amenities such as streetscape enhancements and to construct the parking garage.

Now, the timing is right to move ahead, and we’re all very excited to be pioneers with a tangible project that truly illustrates the city’s vision for the BCD and can start the ball rolling on revitalizing the area. Currently, we are in the pre-application and negotiation stage with the City of Bend and the Bend Urban Renewal Agency, respectively.  There are a number of critical steps we need to accomplish before the public will see construction activity on the property itself, including a neighborhood public meeting, a site plan application and review, site improvement plans, and a building permit.  If all goes according to schedule, we hope to have construction underway by this time next year.

181 Franklin as viewed from the NE 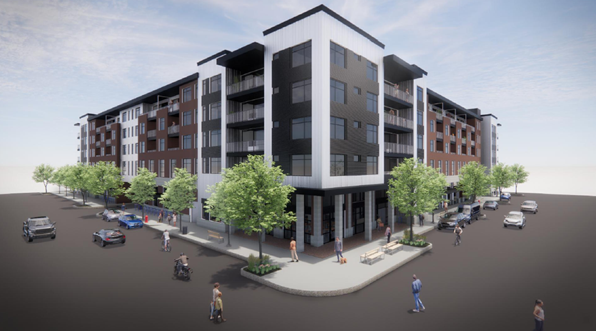